On the third and final day of the 2009 Penny Arcade Expo, Andrew Mayer delivered a talk titled “The Future of Gaming: You Don’t Know What You’re Going to Get.” A game-industry vet in the more casual and social-gaming spaces, Mayer currently serves as a user experience consultant for MediaShifter.

Mayer’s forward-looking session began with a look at the past and present, namely as it pertained to hardware. According to Mayer, hardware has traditionally driven innovation and evolution in the game industry, but it’s reached a point where technical capabilities are no longer driving the market.

Mayer s session continued with the thought that bite-sized games are now becoming more significant revenue drivers than traditionally big-budgeted titles, thus changing our entire perception of where the users are. Case in point: Farmville has 18 million users while World of Warcraft has 12 million.

Read the rest of the analysis of Mayer’s session at Gamespot.

Speaking exclusively to Eurogamer, director Graham McAllister said his techniques can “inform [companies] to make a better game”, pushing them closer to the “magic line” of 80 per cent.

“We just finished some research where we can start to predict a year in advance what the game is likely to get,” McAllister told us. “And obviously we get more accurate as time goes on.

Vertical Slice’s tests are based on looking at over 150 back issues of Edge magazine and seeing what factors traditionally impact a game s score.

If anything, seeing this predictive game score can help us determine whether or not a game’s perception is positive or negative at the time of test taking, and further insight can help impact a game s marketing plan by identifying which aspects of a title to focus on.

From The Hollywood Reporter:

Co-helmed by “Crank” co-directors Mark Neveldine and Brian Taylor, “Gamer” opened to audiences skewing 64 percent male, with 60 percent of its support from patrons under age 25.

“The opening was in line with our projections,” Lionsgate exec vp distribution David Spitz said.

It’s hard to believe expectations weren’t higher for a Labor Day weekend action flick with a mid-level star in Gerard Butler as the lead, but the story of how this film stacks up to something like District 9 (by former-Halo director Neill Blomkamp) could prove interesting, and will be the subject of one of our upcoming exclusive features.

Just released is a Commodore 64 emulator that plays a number of C64 games, each sold separately. To get you started, the emulator comes with five free games: Dragons Den, Le Mans, Jupiter Lander, Arctic Shipwreck and Jack Attack.

This goes along the lines we’ve been touting of looking at old IP and trying to use it to either market something brand new, or open up a new market, much like these C64 games are doing.

We love when limited editions are actually, you know, limited.

Uncharted 2 has a special edition that includes the requisite art book and plastic toy (in this case, a knife), but rather than making it as easy as pre-ordering the game to get it, Sony is having gamers jump through a few hoops to land their copy.

And part of what makes the Fortune Hunter Edition a real fan collectible is that you can t buy it you can only win it! There will be several ways to win including right here on the Blog. Stay tuned as we’ll have more details on that in the very near future!

Keep it really personal and exclusive to your biggest fans, and they will show up with the all important viral word-of-mouth that is usually so difficult to land.

Ladies and gentlemen my name is Stephen Toulouse and I am the Director of Policy and Enforcement for Xbox LIVE. Many of you know me by my Gamertag, Stepto.

So, what does policy and enforcement mean for Xbox LIVE. Our job is to help provide safe and enjoyable experiences on Xbox LIVE.

So what are some of the things that get you permanently banned Repeat egregious behavior. Things like fraud, piracy. Let’s see I’m missing something. There’s something else oh yeah. Naked Uno. Actually, naked anything.

Take a look at his talk from this past weekend s PAX conference for an insightful look at Xbox Live’s top cop, the guy who keeps your games pleasant when, frankly, they’re largely out of our hands. 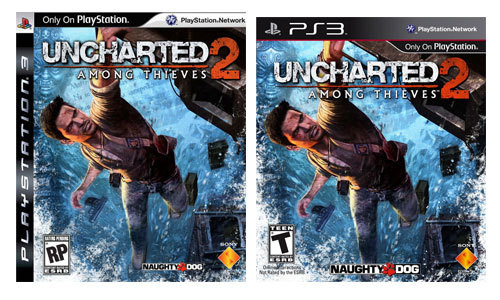 Uncharted 2 is among the first batch of games undergoing a new standard box art design as part of Sony’s massive rebranding of the PlayStation 3.

Gone is the Spider-man font on PlayStation 3 along the left side of the box, instead replaced with more real estate for the game’s art assets. Along the top, PS3 is prominently displayed, as is the PlayStation Network logo from the old box art and an Only On PlayStation tag on the upper right.

The new boxes follow Sony’s PS3 redesign, price cut and rebranding away from the PlayStation name as the company adopts a cleaner look across its video game product line.

It’s not a straight up rebuttal, but apparently Sony corporate is singing a different tune than what we heard from a Sony rep on the floor of IFA (multiple times) the other day: that all existing PS3 games would be playable in 3D after the software update next year. According to Sony, it’s “conducting a technological investigation” as to the possibility of this, but claims there’s “no plan for the market launch of this at this time.”

There are still a few things to sort out on the technical end, but even more so, the upcoming shift to 3D will prove to be a marketing hurdle.

Many consumers who have HDTV sets haven t hooked up their systems appropriately to get the HD signals to their televisions. Console makers don’t help matters either, with the PS3 and Xbox 360 both HDMI-capable, but sans the HDMI cable to really make an HD visual output a guarantee.

Still, for some game companies, the advent of 3D can be as important to gaming as the popularity of motion controllers. At least one game, Invincible Tiger for Xbox Live Arcade and PS3, already offers consumers the choice to play the game in regular 2D, but also in two types of 3D (one with the old school red-blue glasses and the other with polarized lenses).

As game marketers, do you think 3D gaming s pros outweigh the cons

Today’s video of the day comes to us from Mega 64, the folks who have brought viral sensations that brings video game characters into real world situation; in this case, the trainer from Nintendo’s classic boxing series, Punch-Out.  Enjoy.

Australia-based designer Tai Chiem’s bugged-out next-gen gaming systems take it to the next level. Above, his X-Box 720; below, a Playstation 4 with a glass touchscreen panel, and bottom, the coup de grace–a PSP with a flexible, roll-out OLED screen.

Today’s AFK looks into the future of gaming, and is a fun look at some sweet concepts that could someday make it onto store shelves.