In July, Chipotle Mexican Grill released the animated short film A Love Story. The production, which has been viewed more than 61 million times, is a cautionary tale about two young entrepreneurs whose rivalry results in competing fast food empires that sacrifice quality for quantity.

A Love Story is written and animated in a style reminiscent of a Pixar film, and tells an emotional story set to music, without dialogue. Now the restaurant’s message of staying true to fresh, unprocessed ingredients continues with a card match memory game beginning Wednesday. 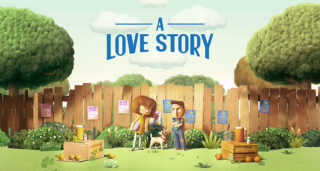 Players must match cards depicting fresh ingredients like onion, jalapeños and brown rice but suffer time penalties should they choose an artificial ingredient. Those who play the game in the US or Canada will receive a buy-one-get-one offer via SMS text message and must provide a cell phone number and email address to redeem.

“A commitment to real, unprocessed ingredients remains central to our mission,” Mark Crumpacker, chief marketing and development officer at Chipotle, said in a statement. “This new game furthers the important themes in A Love Story while reinforcing our commitment to sourcing the very best ingredients and preparing them using classic cooking techniques.”

Thus far, audience reaction to A Love Story (the film) has been positive. Market researcher Ace Metrix noted that the film was the highest scoring quick-service restaurant ad it ever tested—”an accomplishment made more impressive by the film’s three-minute length,” Chipotle said.

The company’s own research showed that 71 percent of consumers surveyed would be more likely to agree that Chipotle uses high-quality, whole ingredients, and 65 percent said the film made them more likely to trust the company.

According to the Brand Keys 2015 Customer Loyalty Engagement Index, Chipotle was number one for customer loyalty. Chipotle operates under the promise of “food with integrity,” meaning it’ll supply meats free of antibiotics and hormones when possible. Last January, the company stood by its mission to only provide the best ingredients by removing pork from its menu for about a third of its stores after discovering that one of its suppliers wasn’t living up to its animal welfare guidelines.

Chipotle, which has seen its profits drop by 82 percent, has been on a continuous saving face mission with a variety of marketing plans in wake of the E. coli outbreaks that rocked the company to its core over a six-month stretch beginning last year. For example, the restaurant chain is making a big push for millennials with a weekly Snapchat show called “School of Guac.” The comedy posts are shown at 3 pm on Tuesdays—a type of appointment viewing that may become a lot more common now that Snapchat is wooing Hollywood for content.

A Love Story is the latest animated campaign in collaboration with Passion Pictures—previous campaigns include Back to the Start, a tale about industrial farming, The Scarecrow, about processed food and Farmed and Dangerous—that explored how perceptions are created in the industrial food sector.