Even those with only general knowledge of mobile gaming recognize the company Supercell, or at least one of its multi-million-dollar generating games, such as Clash of Clans and Clash Royale. So it’s little wonder why the Chinese tech giant Tencent, which took full ownership of League of Legends developer Riot Games last year, decided to add Supercell to its holdings.

Tencent announced today that it is acquiring Supercell in an agreement to buy 84 percent majority ownership from Japanese telecom outfit Softbank, which was confirmed by Supercell. As a result, Supercell’s total valuation will reach a whopping $10.2 billion, and will give Tencent incredible dominance over the mobile gaming market worldwide. The deal is worth an estimated $8.6 billion.

Many factors went into the deal, including how the studio will continue to operate independently, just as Riot Games does. For Tencent, expanding reach to more gamers is the main goal.

“China is home to more gamers than any other country,” explained CEO Ilkka Paananen. “Tencent’s platforms reach around a billion users (yes, a billion!). And, they have around 300 million unique users playing games on their platforms. What this means for us is that together with Tencent, we can bring our games to so many more players. Also, their social platforms offer many new possibilities for our games, particularly for social play. All of this is very exciting!”

Newzoo explains how Tencent now has 13 percent of the global $99 billion dollar gaming business. Its acquisition of Supercell boosts its annual revenues significantly, with a 24 percent year-over-year increase. Meanwhile, its main rival, Activision Blizzard (combined with its purchase of Candy Crush developer King) has a smaller portion, followed by Microsoft, Sony and Apple. 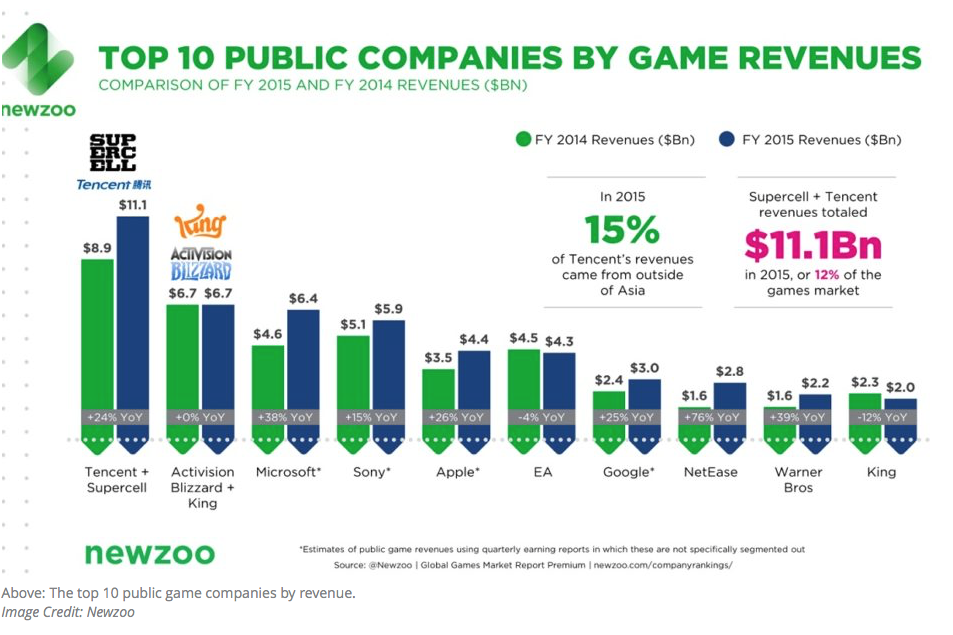 “This is certainly a good deal for Tencent,” said Peter Warman, CEO of Newzoo, about the report. “It solves a huge strategic problem and provides immediate additional revenue potential. This year, Supercell is on track to make over $2 billion outside of Asia. This is significantly more than the $1.3 billion Tencent made outside of Asia last year, the majority of which came from League of Legends. Tencent will now finally make serious mobile revenues outside of its home turf.”

This means doubling (or perhaps even tripling) the $1.3 billion it managed to generate outside of Asian markets the previous year. “The immediate opportunity comes from the Android ecosystem in China, representing around two-thirds of the Chinese mobile market,” said Warman. “Clash Royale is one of the best performing games on iOS in China and has just recently launched on Android in the third-biggest store in China: 360 Mobile Assistant. Tencent’s MyApp store is the biggest. Though it is not written in stone yet that Kunlun will no longer publish Supercell games, it seems obvious that Tencent will take over. Using Tencent’s store and QQ community represents an immediate $1 billion+ opportunity for Supercell’s portfolio in China, particularly Clash Royale.”

This acquisition will no doubt shake up the mobile industry in the months ahead, and maybe that means seeing more awesome Liam Neeson commercials in the future.